(No reviews yet) Write a Review

The PreSonus StudioLive 32R exhibits exceptional performance, both as a rackmount mixer and as a stagebox for your StudioLive Series III console. It features 32 great-sounding XMAX preamps, a flexible array of I/O, and comprehensive routing, making it useful in innumerable live applications. It's equally at home in the studio, boasting built-in 40-in/40-out USB and 55-in/55-out AVB audio interfaces. Onboard stereo SD recording is also supported, making instant live recordings a breeze. Sculpt your sound to perfection, thanks to vintage-style EQ and compression on every channel, along with a range of reverbs and delays. The StudioLive 32R comes complete with wireless control via your computer or smart device.

Flex Mixes offer a ton of freedom for any mixing application

At Musical Garage, we know it can be frustrating trying to use the same mixer for many different tasks. That's why we're excited about the 16 Flex Mixes offered on the PreSonus StudioLive 32R. Flex Mixes can be set up as Aux mixes, Subgroups, or Matrix mixes, depending on what your show demands. Need a ton of different monitor mixes for a large group of musicians? No problem, you can create up to 16 aux sends if you need to. Same with Subgroups and Matrix mixes — perfect for theater productions and multi-zone venues, respectively. Basically, the StudioLive 32R's Flex Mixes allow you to adapt your mixer to the mixing task at hand, instead of adapting your workflow to the limitations of your mixer. Simply put, the 32 Class A XMAX preamps onboard the StudioLive 32R sound like they belong in the studio. Their high headroom and low noise floor deliver extremely clean and clear sound you simply wouldn't expect from a live console. And mic preamp settings are fully recallable, which is a huge time saver when you mix or record the same band or show on a regular basis. One of the major updates Series III brings to the StudioLive mixer line is powerful and flexible remote control via both wired and Wi-Fi network connections. If you're the engineer, then you'll love UC Surface, which is available for Mac, Windows, and iPad platforms. UC Surface lets you access virtually any aspect of your mix, and with support for up to four screens, you could hardly ask for more comprehensive feedback. On the other side of the stage, artists can control their own monitor mixes via the QMix-UC app. What's more, QMix-UC is available for both iOS and Android operating systems. 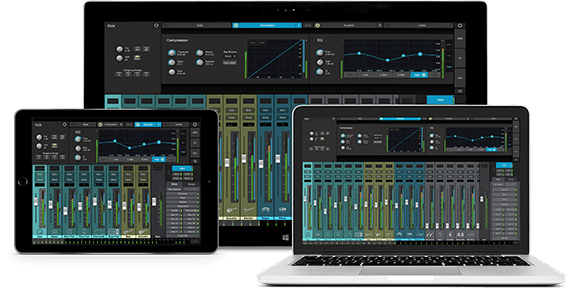 The StudioLive series of consoles has always been known for outstanding effects and processing capabilities, and the StudioLive 32R takes it even further. You get four internal effects buses that are loaded with a combination of reverbs, delays and other effects that you can route any channel through. On top of that, Fat Channel processing offers vintage EQ and compressor models on every channel. MSRP: $2,299.99
Now: $1,799.95
Was:
Infinitely Versatile AVB Stagebox and Rackmount Mixer The PreSonus StudioLive 24R exhibits exceptional performance, both as a rackmount mixer and as
PRESONUS-SL24R

MSRP: $2,299.99
Now: $1,799.95
Was:
Infinitely Versatile AVB Stagebox and Rackmount Mixer The PreSonus StudioLive 24R exhibits exceptional performance, both as a rackmount mixer and as a stagebox for your StudioLive Series III...
PRESONUS-SL24R

MSRP: $1,799.99
Now: $1,399.95
Was:
Infinitely Versatile AVB Stagebox and Rackmount Mixer The PreSonus StudioLive 16R exhibits exceptional performance, both as a rackmount mixer and as a stagebox for your StudioLive Series III...
PRESONUS-SL16R

MSRP: $4,499.99
Now: $3,999.95
Was:
The most powerful mixer in its class. The Most Formidable StudioLive Yet The StudioLive 32SX packs a lot of power for a compact console — it’s PreSonus’s most formidable...
PRESONUS-SL32SX

MSRP: $3,299.99
Now: $2,899.95
Was:
Versatile Digital Mixer with Powerful Recording Capabilities  The StudioLive 32SC packs a lot of power for a compact console — it’s PreSonus’ most formidable offering yet...
PRESONUS-32SC

MSRP: $1,599.99
Now: $1,299.95
Was:
From Live Mixing to Studio Recording The PreSonus StudioLive 16.0.2 USB is an excellent-sounding compact digital mixer with a flair for connectivity and extensibility. You'll have unprecedented...
PRESONUS-SL1602USB

MSRP: $799.95
Now: $699.94
Was:
Innovative Hybrid Amplifier Sets This PA Speaker Apart The PreSonus Air15 active PA speaker is compact and lightweight, but it produces extended lows and natural-sounding highs. A 15" woofer and 1...
PRESONUS-AIR15

MSRP: $1,039.95
Now: $899.95
Was:
You will love this to Optimize and Streamline Your Stage Setup Bridge the gap between the band, FOH engineer, and audience with the PreSonus NSB16.8 AVB-networked stage box. Fitted with 16 locking...
PRESONUS-NSB16.8

MSRP: $2,859.95
Now: $2,199.94
Was:
Envelop Your Entire Audience in Sound Want to envelop your entire audience in a gorgeous panorama of sound? The CDL12 will make it happen. PreSonus describes this hybrid point source/line array...
PSONUS-CDL12